Ethereum 2.0 and its Roadmap

When most people hear “Ethereum”, they think of ether (ETH), the number two cryptocurrency by market cap. Likewise, people typically talk about bitcoin, the asset, rather than Bitcoin, the network.  Some quick takeaways: 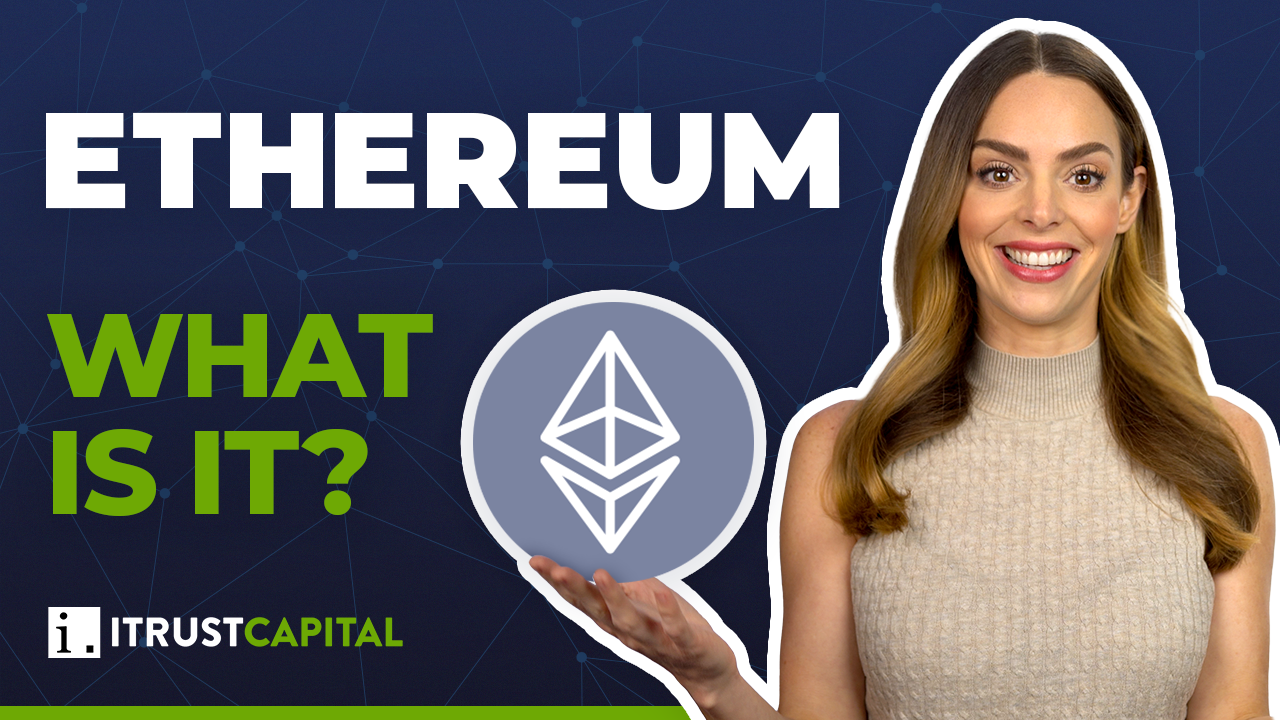 The Problem of Scalability

Herein lies one of the issues that both networks face.  Their blockchains need to scale in order to support growing demand. Otherwise, high network fees may only become more common.

Decentralized blockchains have a hard time scaling securely.  Ethereum’s founder, Vitalik Buterin, coined the term “scalability trilemma'' to illustrate this issue.  The trilemma states that there is a tradeoff between decentralization, security, and scalability, where obtaining two of the three properties is feasible.  Strength in all three, however, is notoriously difficult, which has spurred a lot of research in distributed systems and blockchain security mechanisms.  The trilemma is not a mathematical rule, as blockchains can have a wide variety of potential architectures, but it does seem to describe some of the typical challenges inherent in blockchain design. 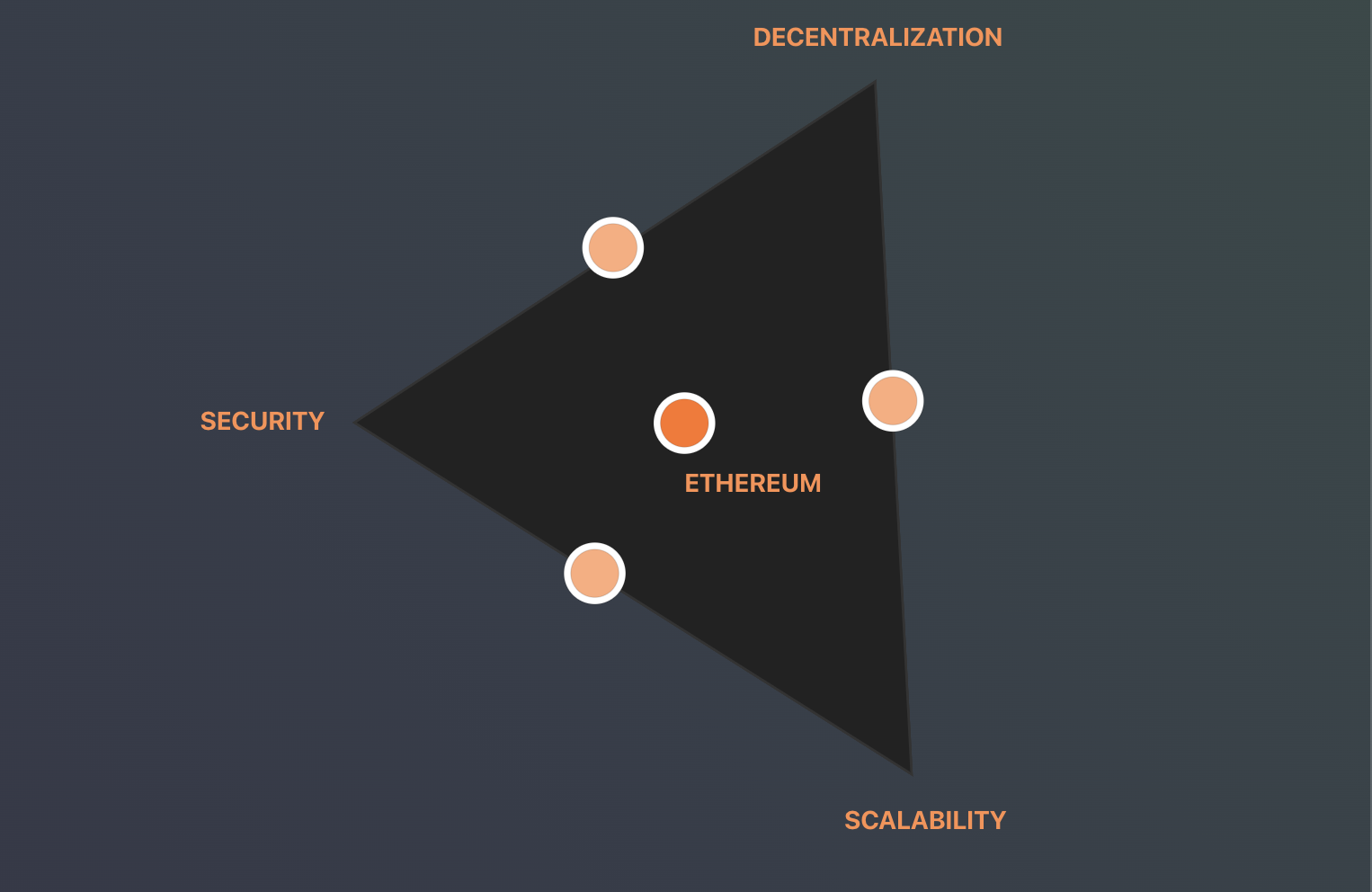 Certainly there are many payment networks worldwide which are both secure and scalable (the Visa network, for example).  They can achieve this by having complete central control of the payments ledger, so these systems are not decentralized (an extreme form of example A in the figure above).

There are blockchains which were designed to be more scalable, but none at present are as decentralized or secure as Bitcoin and Ethereum.  Security of a blockchain increases when networks grow and become more distributed.

If the validator rewards aren’t sufficient to attract a large contingent of node participants, would-be attackers could conceivably expend enough resources to dominate the network and alter the blockchain (a so-called “51% attack”).  This effectively keeps major financial applications from being deployed using newer or less secure blockchains due to the risk of their security being exploited in this way.

Bitcoin and Ethereum are purported to be more difficult to attack and broadly decentralized by virtue of their established networks.  But using proof-of-work for consensus and requiring every node of the network to validate the entirety of the blockchain makes them clunky and less responsive.  Currently Bitcoin can only process around 3-7 transactions per second, and Ethereum only about 7-15 per second.  For dramatic comparison, Visa processes an average of 1700 transactions per second and claims it can handle many more.

Ethereum has proposed a roadmap to improve its scalability, including updating core protocol specifications to improve its utility and value over time.

Ethereum has announced an update in the coming years, known as Serenity, or ETH 2.0.  This update will complete the evolution of its main network from a proof-of-work (PoW) to a proof-of-stake (PoS) blockchain. This means that its consensus mechanism, the protocol that processes current transactions and adds each new block to the blockchain, will operate in a fundamentally different way.  How will it work?

In PoW, the validators that are allowed to mint new blocks of transactions are called “miners”.  Each miner races the others to solve a mathematical puzzle, a cryptographic hashing algorithm that is required to be solved by “brute force”, which really means raw computational power.  Miners repeatedly calculate hashes for vast numbers of potential solutions until the correct one is found.  As an incentive for performing this work, a “block reward” is issued to the miner, which adds a small amount of newly created BTC or ETH to the respective network.

This mechanism improves security, since enormous resources would be required to dominate the network and alter data in the blockchain.  However, it’s also inefficient.  It is estimated that the Bitcoin network alone consumes 80 Terawatt-hours of electricity annually, which has led to some harsh criticisms from environmentally conscious communities.

Another detriment of PoW is that it has become very difficult for the average miner to earn rewards.  In order to compete with other miners on the network, specialized hardware is required to maximize the speed of the hashing algorithm.  This actually reduces decentralization, since the miners with the most resources have a majority of the nodes and are the only participants with a reasonable chance of succeeding.

In Ethereum’s proposed PoS system, an alternative algorithm is used to determine the nodes that mint a new block.  Validators put 32 ETH in a staking contract, which issues a single validator for the network.  The consensus mechanism then randomly chooses from the entire validator set (using a specialized random number generation scheme that is resistant to exploitation) in order to determine which one will add the next block and receive the block reward.  This creates a more even playing field among all validators and promotes further decentralization of the network.

Since the energy-intensive hashing algorithm isn’t used to determine the validator that adds the next block to the blockchain, PoS can be accomplished with far less energy expenditure.  It has been projected that once Ethereum 2.0 is live, its energy consumed will be reduced by 99.9%, compared to PoW.

Additionally, specialized hardware to run the algorithm will no longer be required.  Anyone wishing to run an Ethereum validator node will be able to do so with a consumer-grade laptop of sufficient memory to hold the Ethereum blockchain.

Using PoS to validate the blockchain may also improve scalability via the use of “sharding”.  This strategy essentially splits the blockchain into multiple parallel chains, each with a responsibility to validate only the portion of the network on its assigned shard rather than the entire chain.

According to Ethereum, the transition to PoS is proposed to be a three phase process.  Each stage will undergo a testnet process prior to launch, which aims to ensure the system is ready for the next phase and to discover and rectify issues prior to each transition.

In December of 2020, Ethereum’s beacon chain went live, and proof-of-stake became a reality.   Currently over 7.7 million ETH have been staked, and there are over 240 thousand active validators.  This is an increase in decentralization, with the number of active beacon chain nodes approaching 100 times the number of miner nodes on Ethereum mainnet. 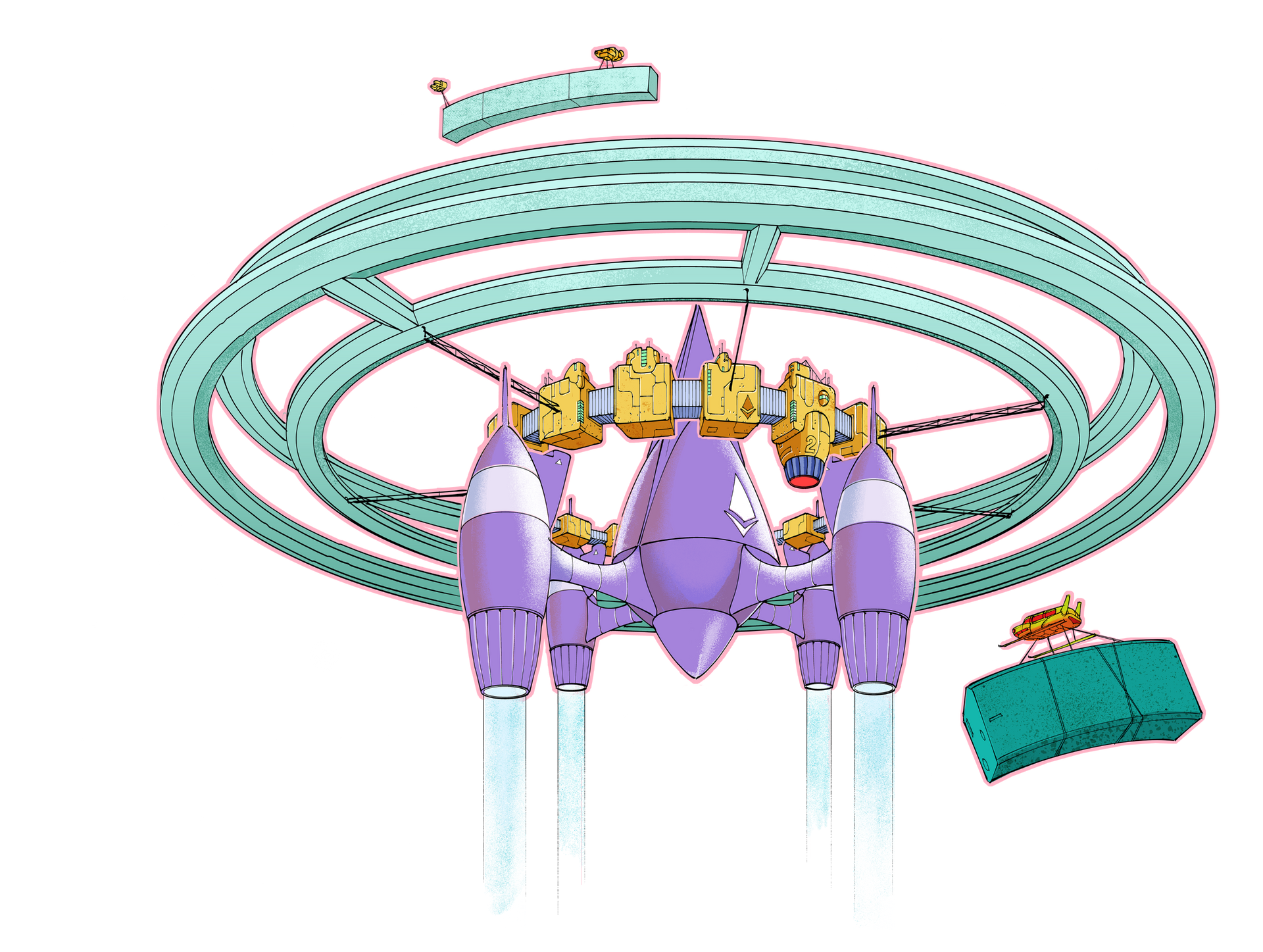 The Merge, by artist Victor Hachmang

As of January 22, 2022, ETH2 no longer exists. This simply means that the terminology associated with the upgrade roadmap is transitioning. Core developers working on the network upgrades transitioned from ETH2 to “consensus layer”, and from ETH1 to “execution layer”. With the many upgrades occurring, the consensus and execution layers are intended to merge and once again be known simply as Ethereum. ETH2 as a term may be dead, but its proposed roadmap is still in place.

Some taxes and conditions may apply depending on the type of IRA account. ​​Investors assume the risk of all purchase and sale decisions. iTrust Capital, Inc. makes no guarantee or representation regarding investors’ ability to profit from any transaction or the tax implications of any transaction. iTrust Capital, Inc. does not provide legal, investment or tax advice. Consult a qualified legal, investment, or tax professional.

In-Kind Transfers for Digital Asset IRAs
Kevin Maloney, CEO, iTrustCapital: Crypto IRA Platform iTrustCapital Has No Exposure To FTX or FTT
What Is The Sandbox? What Is SAND?
Buried Treasure: Nearly $1.4 Trillion Revealed In Old 401Ks