The Compound team, led by Robert Leshner and Geoffrey Hayes at Compound Labs, are no slouches when it comes to grand visions. They created the original Compound protocol (built on Ethereum) with the goal of building the world’s first open-source money market for borrowing and lending assets. Just a few years later, Compound Finance is now one of the largest Decentralized Finance (DeFi) protocols in the world and has become a primary building block within the Ethereum ecosystem.

This vision is now expanding, as the Compound team is now in the final development stages of Compound Gateway; a stand-alone blockchain designed to be the world’s first multi-chain interest rate market. The project was originally coined Compound Chain but has since been positioned as Gateway to more accurate what the product will deliver. This blockchain will be able to interoperate with a range of different blockchains, including Central Bank Digital Currencies (CBDC’s) will be able to access the same open-source money markets.

“Gateway is designed to be a cross-chain tool...The new chain will provide a bridge for assets without demanding token wrapping or other piecemeal shortcuts for getting blockchains to talk to each other.” - Robert Leshner, Founder of Compound 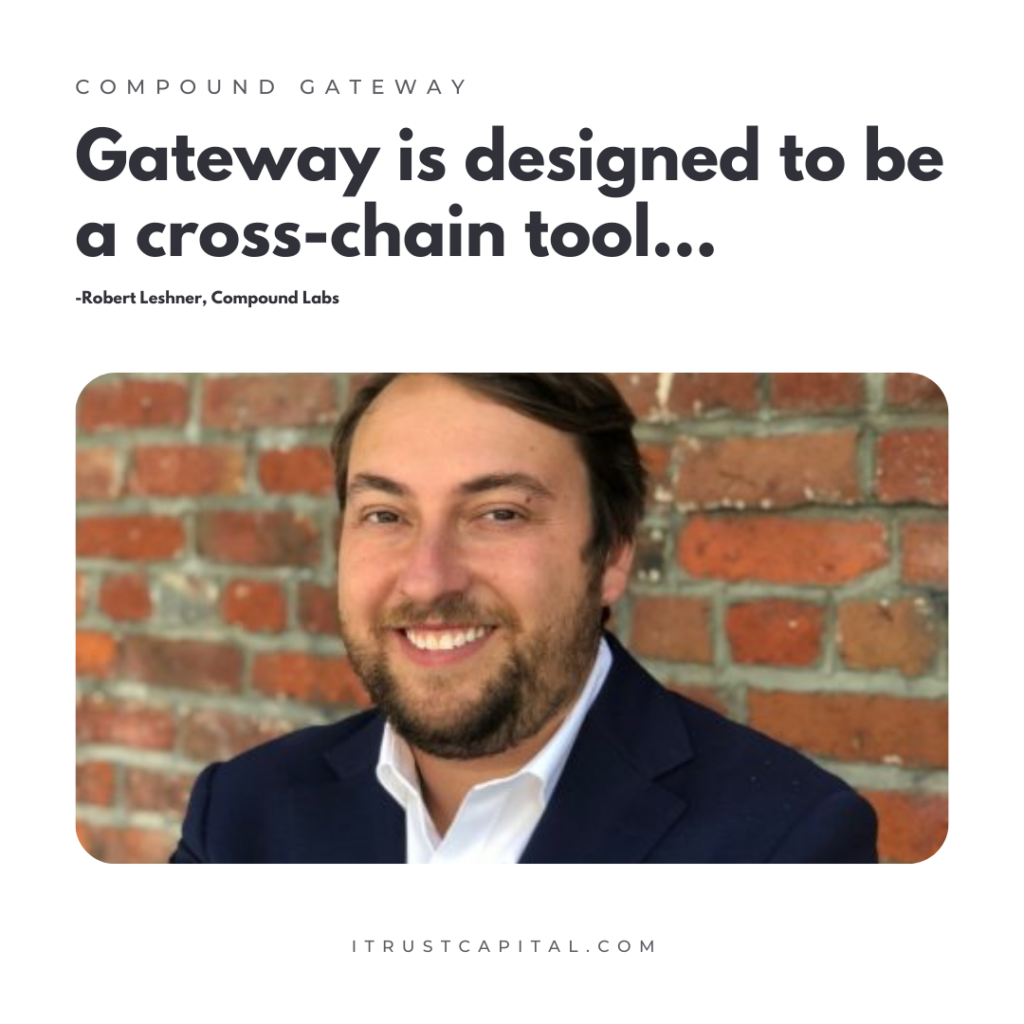 Built on Substrate (Polkadot), Compound Gateway will be a stand-alone blockchain that is governed and controlled by COMP token-holders on Ethereum. Gateway is designed to be fully customizable and upgradable through governance without forks or downtime.

The chain will be secured by validators (nodes with COMP staked) that will earn a portion of all the interest and transaction fees. This ensures an alignment of incentives between the validators and the growth of Gateway.

Compound governance (through the COMP token) on Ethereum will control the further development and upgrades that happen on Compound Gateway.

Compound Gateway will host one single market, albeit multi-chain. This means that it will not only support Ethereum based assets, but assets from other chains as well. This may include Polkadot (DOT), Terra (LUNA), Cosmos (ATOM), Diem (formerly Libra), Central Bank Digital Currencies (CBDC’s) and much more.

These assets will be supported through the use of Starports. Starports are interfaces on other blockchains that help facilitate cross-chain crypto asset transfers. This means that these assets can be bridged back and forth from Gateway and their original native blockchains (such as Ethereum).

It’s been said that Cash is King. In Compound Gateway, CASH will literally be king. CASH is the native unit of account for the ecosystem, which is created through borrowing. This is reminiscent of MakerDAO’s DAI, which is currently the largest permissionless stablecoin in existence and also widely adopted across DeFi.

In my opinion, Compound Gateway gives us a glimpse into the future of blockchain ecosystems. While Ethereum is the clear market leader and will likely remain so overtime due to composability and network effects; a multi-chain future is a likely outcome. This means that as other blockchains mature overtime, there should be an independent, global and decentralized “bank” that can interface between all the blockchains. Competition among this space will be incredibly heated with DeFi players like Aave already starting to execute their multi-chain scaling approach and Terra (LUNA) having first mover advantage with Anchor Protocol. Regardless of short term competition, I believe the future likely has multiple winners for decentralized banking alternatives with Ethereum remaining the global settlement layer among all blockchains.