One of the fastest growing and most exciting projects in the space, Polygon (MATIC), is now available in your iTrustCapital Crypto IRA retirement accounts.

Polygon, formerly known as MATIC Network, is a unique blockchain project that has grown in popularity in recent years. Polygon is built as a layer 2 protocol that allows developers to scale and build infrastructure on the Ethereum blockchain.

Ethereum has faced issues with scalability in recent years due to maintaining robust security and decentralization, but luckily Polygon has emerged as an alternative for many blockchain projects that want the best experience on the Ethereum blockchain network.

Polygon was originally the brainchild of three Indian entrepreneurs, Jaynti Kanani, Sandeep Nailwal, and Anurag Arjun. The trio sought to build a platform built on Layer 2 infrastructure to enable cheaper and faster transactions within the Ethereum ecosystem.

Polygon initially launched in October 2017 on the Ethereum blockchain before moving to its mainnet in 2019. Polygon received support from the Ethereum team and also contributed massively to the Ethereum ecosystem. They helped integrate a Plasma MVP and the widely popular Dagger event notification engine on the Ethereum network.

Since moving to its side-chain network in 2019, Polygon has been focused on developing its ecosystem with numerous partnerships and upgrades to its architecture.

Why Rebrand from MATIC to Polygon?

Polygon was previously known as MATIC Network before it was rebranded in February 2021. The name change indicated a change in approach towards becoming the "internet of blockchain" on the Ethereum network. During this rebranding, they added the talented Mihailo Bjelic as a core developer and both Anthony Sassano and Hudson Jameson as advisors.

Polygon is expected to surge ahead with an all-inclusive ecosystem for Ethereum integrating other features like zk Roll-Ups and Optimistic Roll-Ups. It will also be cross-chain compatible and drive Ethereum's migration into a third-generation blockchain network.

Developers will also access the Polygon SDK kit that enables the deployment of dApps with a single click. The Polygon SDK can also be used to create independent blockchains that are interoperable within the Ethereum ecosystem. 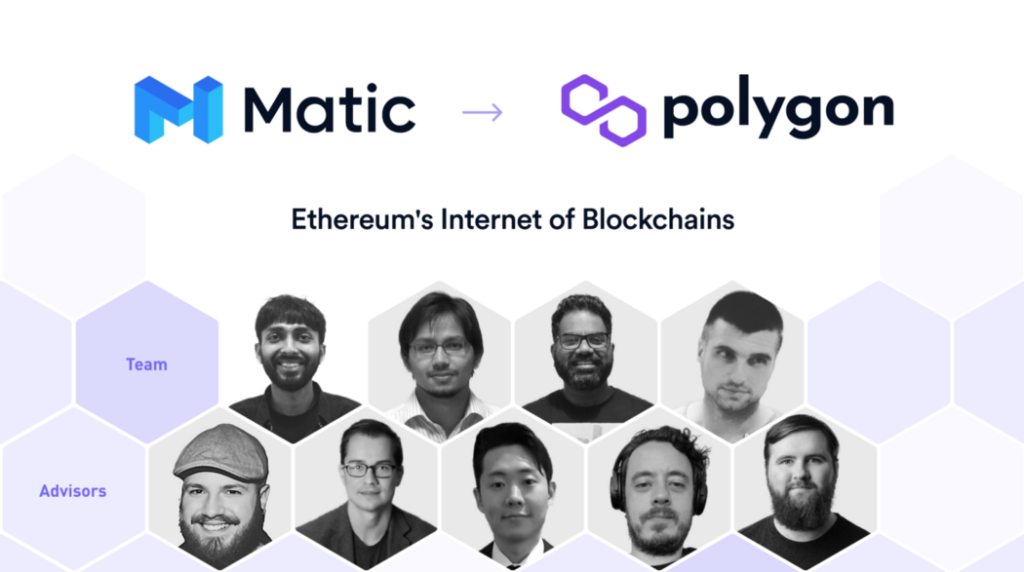 Polygon has attracted interest from many due to its layer 2 infrastructure that solves the problem of scalability on the Etherum blockchain. It is specifically built as a protocol that supports large-scale expansion of applications by leveraging its unique features.

Its team of developers have also continued to expand the blockchain's capacity to accommodate the growing requirements of the blockchain industry. Currently, Polygon can reach speeds of 65,000 transactions per second on a single sidechain and has block confirmation times of less than two seconds.

This makes it one of the fastest and cheapest blockchain protocols compatible with the Ethereum blockchain network. Furthermore, developers can host dAPPS within the Polygon blockchain without compatibility issues. This has helped the Ethereum ecosystem continue to lead the charge in the world of smart contracts. 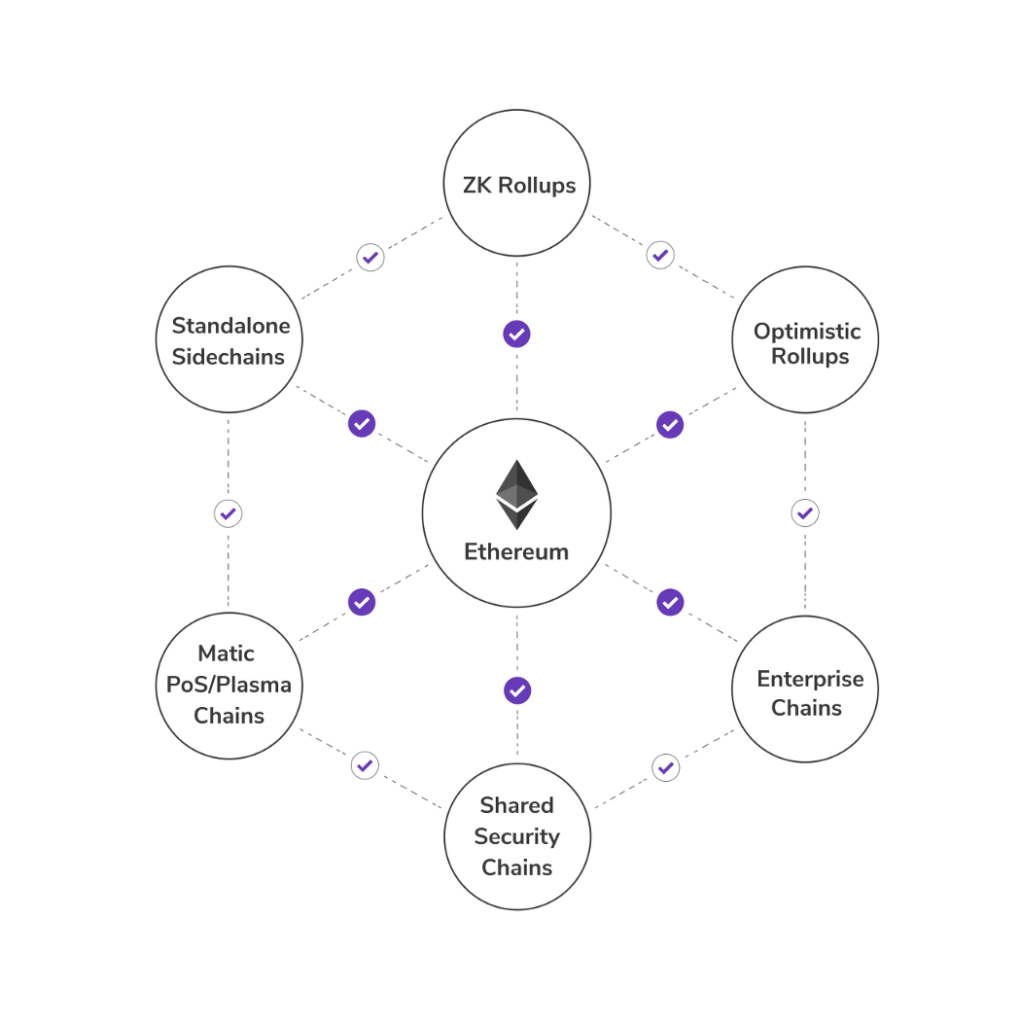 Polygon has a fast-growing ecosystem with more than 350 blockchain projects built on its network. This number continues to grow each day. It has become one of the top choice Layer 2 solutions for Ethereum-based DeFi protocols, including Aave, SushiSwap, Neon District, Pickle Finance, Slingshot Network, and many more.

Polygon's popularity is due to the ease of deploying solutions, scalability, and prospect of low transaction costs for applications.

At the time of publication, Polygon-based solutions have been used by more than 350 applications and more than 700,000 independent users. This increased activity has helped make MATIC, the ecosystem token, surge this year. 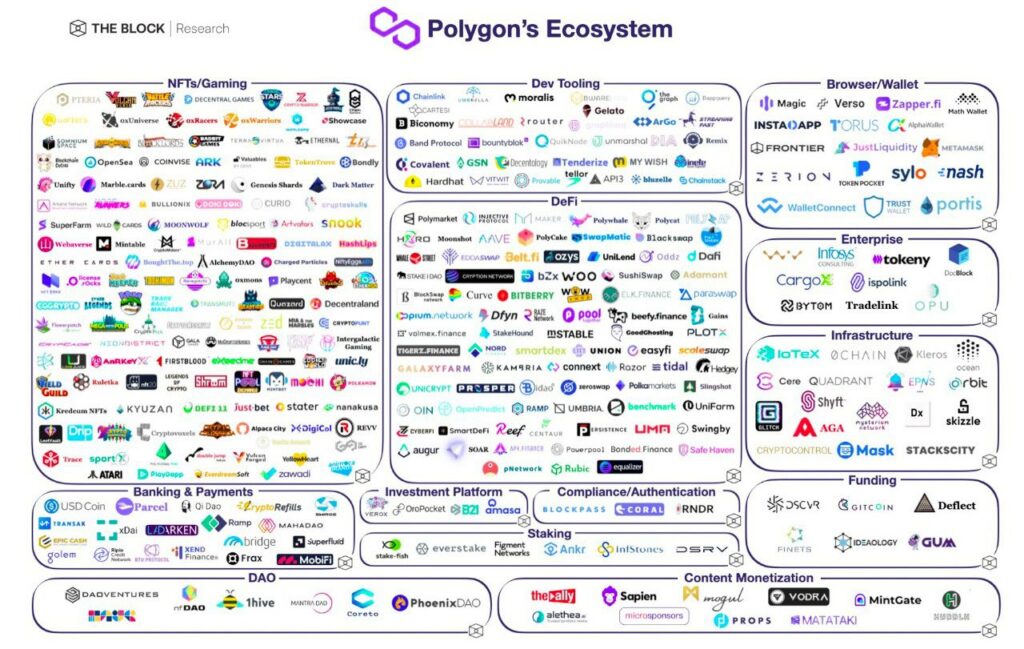 What is Polygon (MATIC) the token?

MATIC is Polygon's native cryptocurrency that has a wide range of utility within its ecosystem. Its primary function is to power the protocol via a gas-based system whereby users pay for network fees using the token to access different features.

MATIC tokens are also used for governance, and holders can vote for new proposals (Polygon Improvement Proposals) and decide on the future of the blockchain protocol.

What the Future Holds for Polygon

Polygon has an extensive roadmap of activities and milestones that it intends to achieve in the coming future. The blockchain platform has indicated that it plans to improve its infrastructure and leverage its strengths as a scalable and cheap Layer 2 solution for the Ethereum blockchain.

The Polygon SDK is also a key feature for its ecosystem, and the blockchain protocol plans to incorporate advanced solutions for developers. Some of which include added customizable features and advanced modules.

Polygon also plans to introduce other products that will attract developers and users to its blockchain.

Important Note: All investments involve substantial risk of loss.  All trading strategies are used at your own risk and you are responsible for the financial resources you utilize.  If the market moves against you, you may sustain a total loss of the initial amount you allocated to the investment.  you should not engage in trading unless you fully understand the nature of the transaction you are entering into and the extent of your exposure to loss.  If you do not fully understand these risks,  you should seek independent advice from your financial advisor.  iTrust is not an investment specialist, tax specialist, financial planner (certified or otherwise), or retirement advisor, and iTrust does not provide investment advice, tax advice, financial planning services, or retirement planning or retirement-specific advice.  iTrust facilitates the purchase of digital currency and precious metals, nothing more, and charges a fee for the service it provides.  All investment decisions are made by iTrust users.  Please read the full Risk Disclosure.

Kevin Maloney, CEO, iTrustCapital: Crypto IRA Platform iTrustCapital Has No Exposure To FTX or FTT
What Is The Sandbox? What Is SAND?
Buried Treasure: Nearly $1.4 Trillion Revealed In Old 401Ks
How Is Crypto Mined? What Is Proof-of-Work?