Polygon, previously known as Matic Network, is a full-fledged multi-chain ecosystem. Without sacrificing security, it combines Ethereum and other sovereign blockchains to solve the usual blockchain bottlenecks, like high gas fees and slow speed.

Matic, the native token of the Polygon network, has a total supply of 10 billion tokens. From an all-time low of $0.003 in 2019, Polygon’s price peaked at an all-time high of $2.68 in May 2021. In this article, we will look into the history of Polygon and why it is a leading player in the crypto world today.

The Problem with Ethereum

Until recently, Ethereum has been the preferred platform for blockchain developers. However, the platform’s shortcomings are multifaceted and deeply entrenched in how the network is built. It has the limitations of low throughput, high gas fees, and delayed Proof-of-Work finality. While these problems will mostly be solved as they fill in their roadmap, there is still demand today.

As a result of these issues, projects began exploring solutions to eliminate these drawbacks while still leveraging Ethereum’s ecosystem. From this backdrop, Polygon offered a solution to the problems - a protocol that enables building and connecting Ethereum-compatible blockchain networks. The protocol is so helpful that new, preset blockchain networks can be deployed with a single click.

How Does Polygon (MATIC) Work?

To achieve this, Polygon leverages a four-layer network consisting of the Ethereum layer, security layer, Polygon networks layer, and the execution layer.

The Ethereum layer functions through a set of Ethereum smart contracts to facilitate checkpointing, staking, dispute resolving, and message relaying.

The security layer serves as a meta-blockchain running in parallel to Ethereum and looks after validator management and Polygon chains validation.

On top of these, the execution layer interprets and executes transactions. 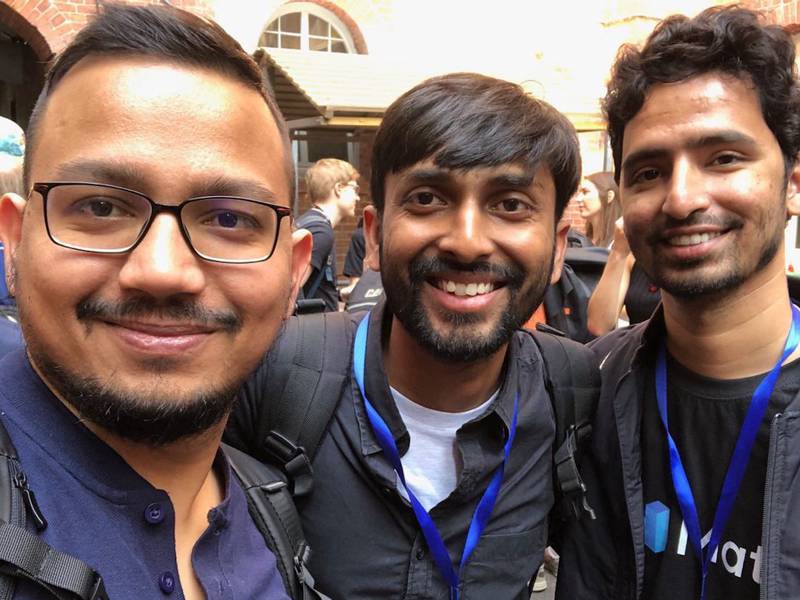 At its core, Polygon has a decentralized team of contributors from all over the world that continue developing the open-source network. Polygon has four co-founders: Jaynti Kanani, Sandeep Nailwal, Anurag Arjun, and Mihailo Bjelic.

Jaynti Kanani, the CEO of Polygon, has a decade of experience in software development and data science. Sandeep Nailwal, the Chief Operations Officer of Polygon, also served as the Co-Founder and CEO of ScopeWeaver.com, a company that leverages dapps (decentralized applications) for business solutions.

Anurag Arjun, the Chief Product Officer of the network, is responsible for defining Matic’s product roadmap, acting as the bridge between its Research, Economics, and Engineering functions.

Apart from the leadership team, comprised of the above four, a rich and diverse advisory board guides Matic. The board has Hudson Jameson from the Ethereum Foundation, Ryan Sean Adams from Bankless, Anthony Sassano from EthHub, PeteKim from Coinbase, and John Lilic from ConsenSys.

Polygon was founded in 2017. To date, it has raised $450,000 in total from four investors. Its investors included Coinbase Ventures, ZBS Capital, MiH Ventures, and Mark Cuban. The latest funding of Polygon was on May 26th, 2021. On August 14th, 2021, Polygon acquired Hermes Network for $250 million. Furthermore, Polygon has invested in two ventures - the most recent being on July 27th, 2021. They invested into Splinterlands and MakiSwap, with the latest being in Splinterlands’ $3.6 million fundraising round.

Why was Matic Rebranded to Polygon?

Matic’s rebranding to Polygon was purely out of the network’s desire to align its brand with its vision and the larger purpose to become a layer-two aggregator. The name Polygon was more suggestive in its mission to support other Ethereum scalability solutions, including Optimistic Rollups, ZkRollups, and StarkWare’s Validium. The network decided to implement its vision through a new Polygon SDK to help developers build their DApps on a scalable and Ethereum-anchored infrastructure.

The name Polygon also signifies the network’s variety of interoperability mechanisms, including its asynchronous messaging systems based on the Ethereum Virtual Machines and state channels. According to Sandeep Nailwal, the tagline ‘Polkadot on Ethereum’, although not an official one, sets an “easier to understand narrative for the community.”

Ethereum has always led the charts as the most favored blockchain for dApps. Yet, its growing adoption has also led to increased congestion in the network, making it slow and relatively costlier. The situation has become so bad that users spend hundreds of dollars in transaction fees in some cases. Amongst this backdrop of Ethereum issues and the developer community feeling uncertain about Ethereum 2.0’s implementation schedule, Polygon arrived. It took the novel approach of scaling Ethereum by utilizing a diverse ecosystem of existing scaling solutions rather than competing with them. It was when some developers started calling it the Ethereum Killer, while the more appropriate title should have been “Ethereum Scaling Solution.”

In fact, “Ethereum Killer” is not the right title for any of Ethereum’s competitors, including Polygon. Ethereum is the leader of the pack when it comes to the competitive decentralized application space, and it will continue to remain so for the foreseeable future. With ETH 2.0 in progress, and if all goes according to plan, Ethereum may finally deal with its scalability woes once and for all. Thus, any project whose sole mission is to dethrone Ethereum by playing against its scalability issues may not succeed. After all, there is enough space for multiple players in the growing blockchain market.

Polygon addresses Ethereum’s inherent and structural issues, like low throughput, poor UX, and lack of sovereignty. It makes it possible for Ethereum to become synergistic with the ZK rollups, Optimistic Rollups, Enterprise Chains, Polygon Plasma and PoS, and the standalone sidechains. To address the issue of high gas fees and the slow speed of Ethereum, Polygon offered a service comparable to Web2, with zero-gas transactions and instant transaction finality. The developer experience was equivalent to Ethereum and did not require any protocol-level knowledge. Neither did it ask for token deposits, fees or permissions.

How to Stake Polygon for Staking Rewards?

Staking is integral to Polygon’s ecosystem. It is a Layer 2 Solution and leverages a network of PoS validators for asset security. The validators stake their MATICs as collateral and become a part of the network’s PoS consensus mechanism. The validators will receive MATIC tokens in return. There is also the provision of delegation, where network members not interested in becoming a validator can delegate their MATIC tokens to another validator. However, they will remain eligible to participate in the process and earn rewards.

The mission of Polygon is to help new projects spin up a dedicated blockchain network. Polygon, with its stability as a Layer 2 solution that is not going to upgrade anytime soon, helps blockchain developers with the immensely useful features of convenient scalability and instant blockchain transactions. The technology of Polygon is highly efficient, where each sidechain on the network can achieve more than 65,000 transactions. The network is capable of supporting a variety of DeFi protocols available in the Ethereum ecosystem.