What Is On-Chain Analysis?

On-chain analysis (sometimes referred to as blockchain analysis) is a new and developing sector of analytics revolving around the data which can be extracted from a blockchain. On-chain analysis is unique to cryptocurrency as it is the only asset class where every action on the network is recorded on a public ledger from which investor activity can be extrapolated. It’s important to note that it does not include any trading activity that took place on a centralized exchange as those actions are internal to the exchange, however, it will track deposits to or withdraws from an exchange.

This type of analysis looks at the fundamentals of the network, which differs from traditional technical analysis (TA) which uses price and volume. There is a huge amount of data that can be seen on-chain with a high level of granularity enabling us to track cash flows, user count, wealth distribution, block size, miner rewards, and more. Using advanced data processing and heuristics, the raw information on the blockchain is used to calculate metrics and is then displayed on graphs. These metrics allow us to filter out the effect of short-term speculators on crypto-asset valuations, giving us a clearer view of the macrostate and health of a network.

The field of on-chain analysis is young but moving very fast and has grown from forum users gathering their own data and making spreadsheets, to platforms providing high-quality data for hedge funds, hobbyists, and serious investors alike.

The first on-chain metric was coin days destroyed (CDD). It was created by Bitcoin Talk user ByteCoin in 2011 as a way to measure market health and participation by looking at the age of bitcoins transferred on a given day.

In 2014 another bitcoin talk forum user under the name of Gbianchi posted “Network Value”. Using the principles from Metcalfe’s Law and focusing on unique address growth. Later in the same year, Jon Racliff posted an early version of what would come to be known as HODL waves (described below).

Willy Woo - one of the most prolific on-chain analysts - created network value to transactions ratio (NVT) in 2017. 2017 was a year that marked the beginning of a number of fast developments in on-chain analysis, including Glassnode, Coin Metrics, and several other companies - as well as Messari, Dune Analytics, and more being founded the following year.

In early 2018, Dmitry Kalichkin proposed another version of NVT using an averaged transaction volume, followed by a new metric called Network Value to Metcalfe Ratio (NVM). Then an update to the HODL waves (this was the first use of the term) was released by Dhruv Bansal from Unchained Capital. Towards the latter half of the year, Nic Carter and Antoine Le Calvex from Coin Metrics unveiled realized capitalization, which showed the total value of all Bitcoins when they had last moved. Within weeks Market Value to Realized Value was published by David Puell and Murad Mahmudov, and to close the year out Tamás Blummer proposed liveliness to gauge shifts in bitcoin hodling behavior.

Since those rapid developments in 2018, there has been a huge increase in the use of on-chain analysis. This growth has brought us a number of new data providers, analysts, and caused the development of countless metrics (over 75 on glassnode alone). It has also spread to the retail sphere where you can see tic-tok traders talking about network growth rates, a big change from the message board style forums only ten years earlier.

Having this arsenal of valuation tools and fundamental-based metrics has proven to be very useful in analyzing the health of blockchains, and even though most were developed for bitcoin (and this is still where the focus is), they can be applied to most blockchains.

Network value to transactions ratio is the crypto-asset equivalent of the price-to-earnings ratio seen in stock markets. Since crypto-assets are not companies and do not have earnings, earnings as a metric are replaced with network throughput, allowing us to think about the network as a payments company. It is calculated by dividing the market cap by the on-chain transfer volume denominated in USD. Comparing the NVT ratio with either historic values (Bollinger Bands are one method for this) or sector values allows some investors to decide if they believe the asset is overvalued or undervalued. High NVT ratios can signal that the asset is potentially overvalued and potentially in an unsustainable bubble or that investors are expecting high growth rates in the future. The opposite is true for low ratios. 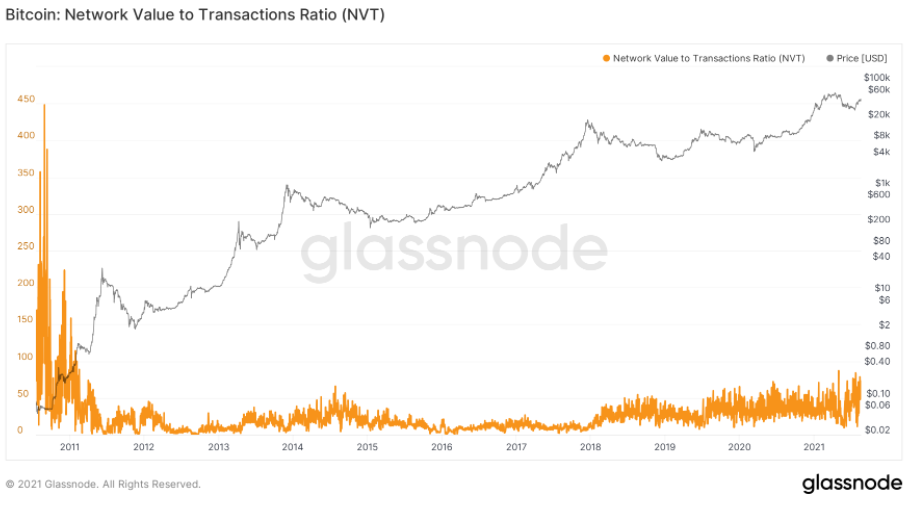 NVT Signal (NVTS) is an adjusted version of NVT, where instead of using raw daily transaction volume a 90-day moving average is used. This version, dubbed NVTS, filters out some of the noise which you can see in the image above, giving us a clearer signal, making it much more responsive and sometimes a leading indicator. Since the daily transaction volume can change drastically day to day, smoothing it out with a medium-term average allows for price movements to have much more of an effect on the metric. 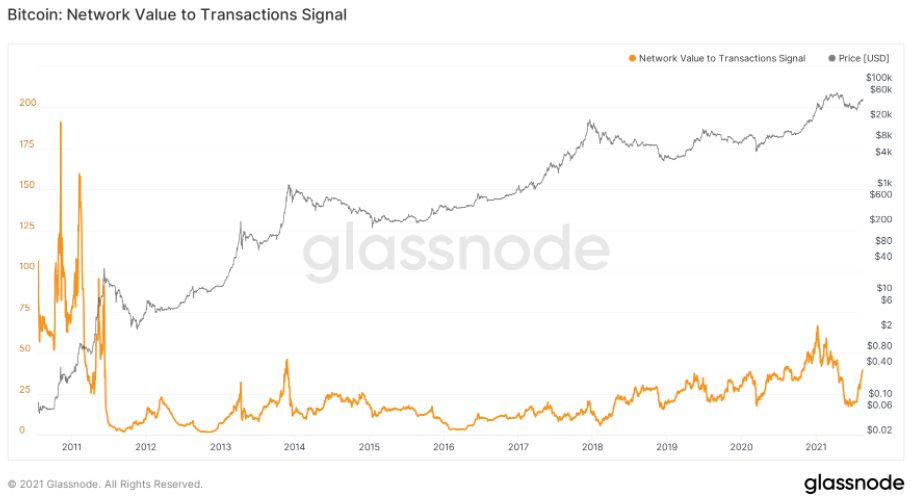 As more and more sidechains and alternative blockchains gain adoption, and users move funds away from the layer 1 chain, there may be a change in transaction volume which could skew the NVT and NVTS ratios to the upside as price increases. This may be a factor as to why both ratios have been trending upwards since the beginning of 2018, which is when the lightning network went live, followed by the Liquid sidechain later that year in October. In addition, this is around the same time that Ethereum and Decentralized Finance (DeFi) started to grow and become the epicenter of blockchain innovation.

HODL Waves group the coins in the network together based on the age of each coin, showing the relative distribution in bands. The age is based on the assumption that a coin that has been moved is a coin that has been sold. This allows us to see if investors are accumulating, distributing, or hodling their coins. You may notice that the 10 year age band never decreases and it is largely considered to be lost coins, though there is a chance it is a very confident hodler. 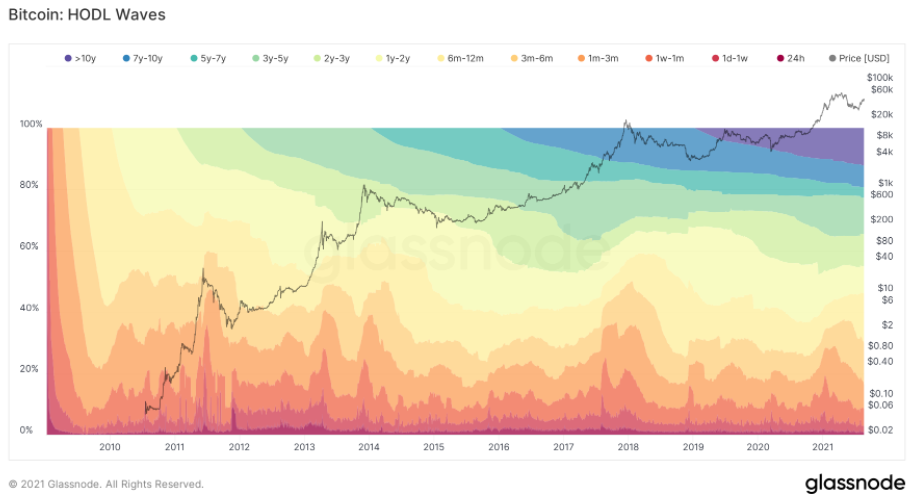 The warm-colored bands (reds/oranges) at the bottom represent coins that recently moved, and at the top, the cool-colored bands (purple/greens) represent older coins that have not moved in a long time. When the cooler colored bands are swelling it shows that coins are being allowed to age. Conversely, if the warm-colored bands swell it shows that coins have been moved recently. This pattern of cool colors swelling during an accumulation phase and then those coins being distributed causing the warm colors to swell is visible in every Bitcoin cycle so far, is the supply transitioning from long term hodlers to short term speculators (and then back to hodlers). It is a great visualization of how investor sentiment and conviction changes over time.

There is a vast collection of on-chain analysis tools that can help you gain a clearer picture of a network's health. There are lots of major investors (eg. ark invest) and analysts (eg. willy woo) who use these tools to make crucial decisions, and the open nature of blockchain allows you to use them too, unlike most tools used in traditional finance. The examples in this article have been focused on bitcoin but many are available for other blockchains, though there are more indicators for bitcoin (some websites where you can find them are listed below). Most of the data providers also provide free research which can be a useful starting point when diving into on-chain analysis for the first time.

This industry is built on cutting-edge technology, and as blockchain continues to expand, people from all over the world will bring their experience and knowledge, and with that comes new ideas and approaches.